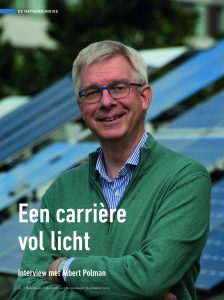 Evolution of our PV research program

In 2008, our group, together with the group of Harry Atwater at Caltech, started research on the use of nanophotonic concepts to enhance the efficiency and reduce the cost of photovoltaic energy conversion. Our initial paper Improved red response in thin-film a-Si solar cells with soft-imprinted plasmonic backreflectors was published in 2009. In 2010 we published a perspective/review paper on the many prospects of nanophotonic design for improved photovoltaics Plasmonics for improved photovoltaic devices (>6.000 citations), also highlighted as an Editorial article. This paper defined the research field of “Light management for photovoltaics” that took off in many labs worldwide. in 2012 together with Harry Atwater, we were awarded the ENI Renewable Energy Award for pioneering research on light management in photovoltaic materials. 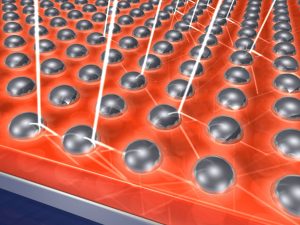 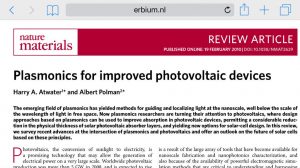 After our initial work on plasmonic solar cells we introduced dielectric Mie scatterers for resonant light coupling and trapping in solar cells. Our 2012 paper Omnidirectional antireflection coating based on subwavelength surface Mie resonators was the first to introduce this concept to improve solar cells. We wrote a perspective on Photonic design principles for ultrahigh-efficiency photovoltaics in Nature Materials (2012).  We exploited our insights in plasmonic light scattering to create Transparent conducting silver nanowire networks. We expanded our research to create demonstrator devices and improved the efficiency of solar cells based on a wide range of materials: thin-film silicon, organic and CIGS solar cells, as well as silicon heterojunction solar cells. In another collaborative project with the group of Atwater at Caltech, we discovered Plasmoelectric potentials in metal nanostructures, published in Science in 2013.  We promoted the use of Nanophotonics for shrinking light-based technology in a review in Science in 2016 and reviewed the state-of-the art in light management for PV in Photovoltaic materials – present efficiencies and future challenges in Science in 2017. We developed metagratings to create Neder 2019 Combined Metagratings for Efficient broad angle scattering metasurface. In 2020 we published a Perspective article in ACS Photonics with all four AMOLF PV group leaders, presenting a wide range of opportunities for photonics for photovoltaics that appear based on all achievements so far. Most recently, we developed spectrum splitters for 2-terminal and 4-terminal perovskite/silicon tandem solar cells based on resonant Mie gratings.

While we developed fundamental insights developed, we started developing novel concepts that could help the introduction of nano-photovoltaics in practical applications. With Marc Verschuuren (Philips Research) we developed Large-area nanoimprint by substrate conformal imprint lithography (SCIL) to create nanopatterns on full-size solar cells. Marc, together with colleagues, has started a company, SCIL Nanomprint Solutions, that has brought the new technique on the market, with the first instruments sold to customers in 2017. In 2015 we developed a roadmap “Nanopatterning for Photovoltaics” together with ASML. Together with FEI/Thermo Fisher and Delmic we developed cathodoluminescence (CL) lifetime imaging as a novel technique to characterize photovoltaic nanomaterials. The new instrument was commercialized by Delmic, a start-up company co-founded by Albert Polman in 2012. Delmic now employs 40 people and has sold many CL instruments to customers allover the world.

Technology transfer from academic research to real-world applications is one of the hardest things to do for a research group. It can take many years before an idea finds its way to the market and PV is no exception: the PERL technology that is now introduced in PV manufacturing was invented in the 1990s. To speed up knowledge transfer we have teamed up with the TNO Energy Transition (formerly ECN). Together with TNO we apply novel concepts developed in our group to solar cells that are made using industrial processes – where possible. Together with TNO/ECN we created Efficient colored silicon solar modules using integrated resonant dielectric nanoscatterers. This new concept won the SolarPower R&D Award at the EU-PVSEC conference in 2017. We  developed  Soft-imprinted Ag nanowire hybrid electrodes on industrial silicon heterojunction solar cells made by TNO/ECN. We participates in the COMPASS and RADAR programs that bring together academic and industrial research and technology development in the Netherlands. To facilitate knowledge transfer between our group and Wim Sinke (TNO) has a guest appointment at AMOLF. To further expand knowledge transfer opportunities, Albert Polman spent a sabbatical at the School of Photovoltaics and Renewable Energy Engineering at the University of New South Wales (Sydney), the institute that initiated much of present-day industrial Si PV technology. We appointed a joint PhD student that works at UNSW and AMOLF. We collaborate with the Fraunhofer Institute for Solar Energy Systems (Freiburg) on ultra-high efficiency III-V/Si tandem solar cells. By setting up this broad network of collaborations with PV technology institutes we transfer relevant technology from our lab to applications in PV technology.

To expand the effect of PV research we initiated several PV research programs in which other principal investigators within and outside AMOLF participated.

With these national initiatives we maximize the impact of academic research and optimize knowledge transfer to industrial applications.

We have developed a Theatre lecture performance “Voor niets gaat de zon op – “The sun rises for free”, to promote photovoltaics to the general public. 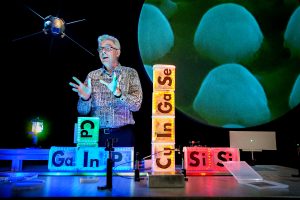